DANCING IN THE VILLA –

Three are the appointments, one in June and two in July, with theme dancing evenings in San Michele al Tagliamento, the municipality that hosts the seaside town of Bibione. At the Villa de Buoi, situated in via Marango, from 9 pm there will be in fact the “Dancing in the Villa”, each of them dedicated to a specific dance style.

Here are the three events in detail:

The Villa de Buoi is an eighteenth-century villa that represents, together with the Villa Mocenigo-Ivancich, one of the examples of aristocratic architecture of the Municipality of San Michele. Formerly belonging to Giovanni Bottari, experimenter of agricultural crops (in particular of mulberry trees and vines), is interested by a recovery project aimed at bringing it back to the ancient splendors. The location of these three evening is therefore remarkable, thanks also to the elegant game of colours and perspectives given by the thick nature that envelops it and gives it a peculiar beauty.

So the appointment is at the Villa at sunset for a night that promises to be “caliente” and that does not require any particular dance skill: only a wild passion for the “movimiento” and for the “sonido”, perhaps after a day of sea and relaxation at Bibione beach, only 15 minutes far by car. 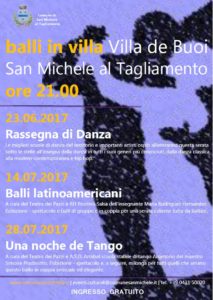