It’s time for orchestra music in Bibione: it will be held in fact on Friday, 15th December 2017 the Concert for Orchestra “Natale 2017” (Christmas 2017) organized by the Lions Club Bibione – San Michele al Tagliamento.

The protagonist of the evening will be the Academia Symphonica from Udine, who will perform at the Conference Room of the Savoy Beach Hotel in Corso Europa 51 at 8 pm under the Direction of the Maestri PierAngelo Pelucchi andd Elias Faccio.

The youth orchestra “Academia Symphonica” was born in 2007 by an idea of some students of the Conservatory “Jacopo Tomadini” of Udine. Originally composed by 50 instrumentalists, it reached a quota of 90 elements, all very young, aged between 13 and 30 years, becoming one of the largest symphonic juvenile complexes in Europe. In its repertoire the orchestra includes:

The event, with free entrance, has the patronage of the Municipality of San Michele al Tagliamento and represents an excellent opportunity to listen to extraordinary music by young capable people of the territory, in the two weeks preceding one of the most anticipated events of the year: the Holy Christmas.

Appointment then at the Conference Hall of the Savoy Beach Hotel on Friday, December 15 at 8 pm, to spend a unique evening in Bibione even in winter! 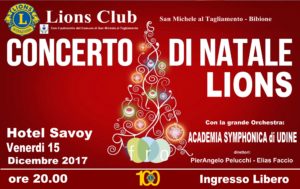